Ben Dolic: “I would like to come back as a songwriter”

This week the 2020 representative for Germany held a Twitter Space, and our reporter Kal had the chance to interview him. But how is Ben doing as of today? What are his upcoming plans? How does he feel about Eurovision these days? Ben told us everything.

“I’m doing good! Right now we’re busy with my next single, and we’ve already got a location for the music video! Just like ‘Kissing Her, Missing you’, we’re shooting it in London again. We also have some plans for merch, but that has got to wait a little longer.”

Kal: “New music? That’s always great to hear, but since there’s so much new music coming out, does this also mean there’s an album coming along the way?”

Ben answered that “It takes a lot of time to make an album, ‘cause there’s so much that needs to be done. But maybe in about a year or two I might drop one.”

Kal then asked how it is to perform at gigs now that everything opened up again.

Ben: “It’s great now that the pandemic is kind of over, but I don’t perform that much. I still need some more tunes to sing. Maybe if I and some friends put a set list together for a festival or something, maybe than we can gather a crowd.”

Kal: Now everything’s back open again, however this wasn’t the case in 2020. How do you feel about missing out on performing at Eurovision?

Ben said that “It of course sucked. The week everything closed down, I was actually about to fly to the Caribbean Islands to film my postcard. It sucked that we didn’t get to see the end result of ‘Violent Thing’, but at least the German broadcaster put together a small Eurovision show, and I got to perform it there.”

Kal was stunned to hear that Eurovision would go so far for postcards. After that he asked if Ben would ever return to Eurovision.

Ben: “For now I wouldn’t say yes again to be the representative for a country. For a whole year you focus your life around one song, and it’s that song only. However I would like to come back as a song writer, or creative director in some sort of way.”

Kal: I have always wondered what the staging for ‘Violent Thing’ was about to look like, so if you can maybe spill some details, then I would love that.”

Ben answered that the staging was going to look very futuristic. “So the staging was about look like the German Eurovision show one, but way better. There would be pictures and videos that would kinda float in front of me, and it would look as if I’m in the future. The main colours of the staging would like the cover art, mainly red and blue. 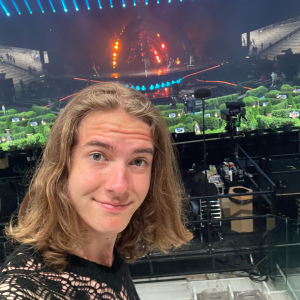